Oregon Scuba Club members Jason and Jeanette recently returned from a 10 week dive trip.  Come hear their stories about diving and sightseeing from some of Earth’s most interesting and exotic places.

With Jeanette Roberts and Jason Casmira 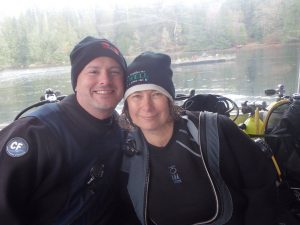 Jason Casmira and Jeanette Roberts were OW certified in 2011 and have been diving ever since – mostly in WA and BC. They took almost every class their local dive shop offered, concluding with a Master Diver cert the first year. They hit their 500th dive in October 2016 at Hornby Island with the OSC. In November 2017 they returned from an epic trip to Taveuni Island in Fiji, the Great Barrier Reef & Osprey Sea in Australia, Malaysia (including Sipadan), and Bali, Raja Ampat & Gili Air in Indonesia. Outside of diving, they both have real jobs at Intel. Jason is an electrical engineer and works as a storage architect. Jeanette is a physicist and works in Quantum Computing.