Laura Tesler has firmly established herself as one of Oregon Scuba Clubs favorite speakers.  Her insightful and witty presentations are spellbinding.  You do not want to miss this meeting. 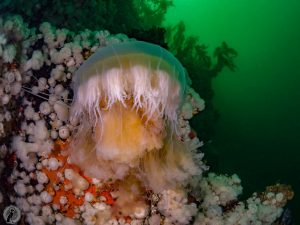 When: Thursday, November 2nd at 7pm

Laura is an accomplished photographer, diver, and naturalist. She graduated from Oregon State University in 1994 with a Bachelor’s of Science in Fisheries and has been employed in the biology world since 1996, working for Oregon State University and the Oregon Department of Fish and Wildlife.  In the last few months she has gone on two awesome dive trips to British Columbia, diving Browning Wall out of Port Hardy and Nigiri Island out of Campbell River.  This is a scene she captured of an Egg Yolk Jelly caught by a wall of plumose anemones.  Come see her amazing photographs and hear her fascinating stories.