Diving off the Oregon Coast, by Tom Hemphill

Chairman of the Board, Northwest Diving History Association

In 2016, Tom co-authored the book Diving Off the Oregon Coast that features a pictorial history of diving and the diving pioneers that first charted the popular dive sites that are enjoyed today.  You won’t want to miss this interesting presentation from Tom Hemphill, one of the foremost authorities on the history of diving in the Pacific Northwest. 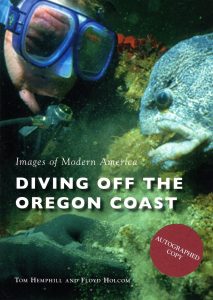 Tom Hemphill made his first dive off the Oregon coast in 1968 at the Newport Jetty.  He soon determined that beach diving the Oregon coast was too limited, so he focused on boat diving, first from his 16 foot inflatable and later with friends that had Pacific City Dories to get out to the outer reefs.  He has dived all along the Oregon coast from Port Orford at the southern end of the coast, to the old Tillamook Head lighthouse between Cannon Beach & Seaside.   Tom has worked professionally in the diving industry since he was certified as a NAUI Instructor in 1971. Now he is a writer, author, consultant and director of the Northwest Diving History Association.

PS, Tom will be bringing some autographed copies of his new book to sell for a mere $20 so bring some extra cash and grab this great guide to diving in Oregon.