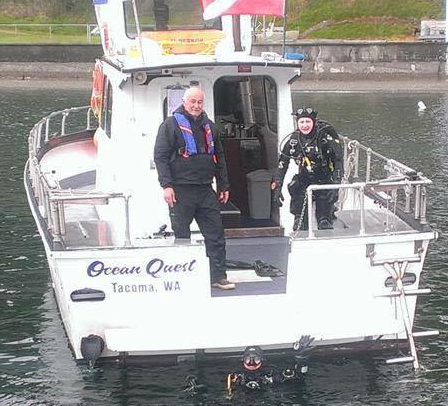 Join us for a few wild tales & high sea adventures as told by George & Andrea of Ocean Quest Dive Charters, out of Des Moines, Washington! It should be a fun evening indeed! 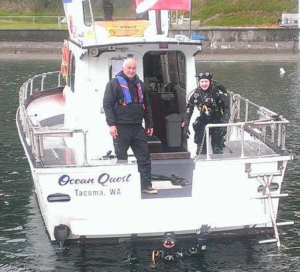 When: Thursday, March 3rd at 7pm

George’s Bio: Received NAUI basis certification in 1980, advanced open water through SSI, Became PADI instructor. and a Public Safety Recovery Diver for 20 years. Upon retirement 10 years ago, purchased The Ocean Quest and leased the boat and myself as captain to Bandito Charters for 8 years. In 2014 formed their own LLC and moved the operation to Des Moines, Washington under Ocean Quest Dive Charters.

Andrea’s Bio: Andrea was certified with her daughter in 2011 at Capital Divers in Olympia and immediately fell in love with the underwater world. Four months after certification, she was asked if she would like to be a deckhand on the Ocean Quest and jumped at the chance! Fast forward 5 years…she’s now a business partner in Ocean Quest Dive Charters, Vice President for Kelp Krawlers Dive Club (Olympia) and board member for GUE Seattle (Globa Underwater Explorers). Andrea also spends some free time dabbling in underwater photography and working as a volunteer diver for Thurston County South Sound Green.