Cold Water and Crazy Critters: Seizing Every Opportunity for Science and Exploration

Ashley Knight is a Marine Researcher currently working in a joint position with the Oregon Department of Fish and Wildlife and Oregon State University. 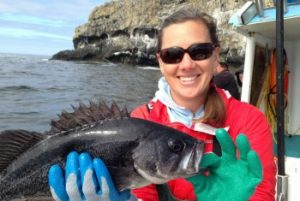 When: Thursday, June 1st at 7pm

Ashley learned to dive in the Florida Keys at age 13 and has been hooked ever since. At the same summer camp where she learned to dive, she fell in love with the ocean and has devoted her career to studying, photographing, and enjoying the seas. She has been a scientific diver since 2006 and has been involved in research ranging from California’s Channel Islands to the Oregon Coast and in the Florida Keys. She has studied fish movements, fish-habitat associations, and marine protected area monitoring. Recently she has joined Lindblad-National Geographic Expeditions as an Undersea Specialist. For the past three years she has collected video footage and photographs of the undersea critters in the cold waters of the Antarctica Peninsula, British Columbia, and Southeast Alaska. She is currently developing a stereo-video camera system to measure fish lengths in marine protected areas off Oregon’s Coast.  She has an exhibit currently at the Hatfield Marine Science Center in Newport titled:

Through the Eyes of the Stereo:  Evaluation of Sizing Error in a GoProTM Stereo Camera System.