You are invited you to hear a very special speaker this month. Paul North is a world explorer and accomplished educator.  Don’t miss this meeting!

Diving Antarctica: Exploring the Underwater Ecosystems of the Southern Ocean 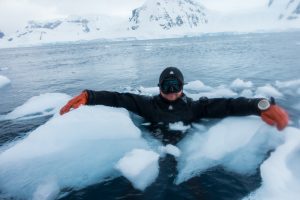 In the cold, dark waters of the Southern Ocean exists a biological landscape unlike any other on our planet. It begins with a density of single celled algae so large, they can be seen from space. Next come the krill, an army of crustaceans bent on harvesting the photosynthetic organisms that cloud the water. What then eats the krill? The answer is nearly all the creatures that call Antarctica home.

In this month’s presentation, polar expedition diver Paul North will journey through the trophic levels of the Antarctic food web. Exampling macro dive footage of the invertebrates that dominate the sea floor. Plankton filmed in the water column and under microscope. R.O.V. footage from depths of 300+ feet, swimming penguins, and predatory encounters with several different marine mammal species. All to highlight the resiliency and unexpectedness of the Southern Ocean ecosystem, so that we may better understand and protect it.

Paul North is the director of Meet the Ocean – an educational nonprofit devoted to educating the public on the importance of our planet’s saltwater ecosystems. He has logged over 200 dives in  the Southern Ocean working as Undersea Specialist with Lindblad Expeditions & National Geographic. His collaboration with scientist Skye Moret – Antarctica: A Chromatic Paradox won the National Science Foundation’s Visualization Challenge and was published in Popular Science magazine in April 2016. Combining storytelling and science, Meet the Ocean releases a monthly podcast, hosted by North, in hopes to mix education with entertainment to awaken audiences to the realities facing our planet.